CLAYTON married into the WGCC family, wedding long-time member Sarah King in 2013. It was just a matter of time before she talked him into rejoining the WGCC after a 25 year hiatus. Over the years he has taught and toured with the WGCC, Rhythm in Shoes of Ohio, the Fiddle Puppets of Maryland and Joe Chvala and the Flying Foot Forum, Minneapolis. He is a founding member of Banjo Dancers and Poor Benny, where he plays fiddle, dances and sings. For a decade he was Millie Ortego’s dance partner when she helped spread Cajun dance and music around the United States. The return to the cloggers has helped him get his chops back up and his stars back in line, and after two more years of dancing Clayton has joined our band. 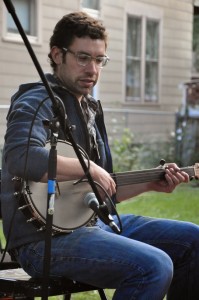 AARON plays the banjo. He was reared in the cultish town of Fairfield, Iowa, where he grew up practicing Transcendental Meditation.  He plays banjo in the band The Hot Pickles.

JUSTIN is a tall, happy man.  He is surpassed in height and boisterousness only by his Bass-fiddle, which he plays joyfully  for the cloggers.  The people are curious, Justin… they want to know more!  please share! 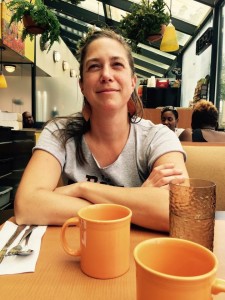 SARAH plays the guitar. In addition to being the guitarist for the Wild Goose Chase Cloggers, Sarah was a founding member and songwriter for the band Orienta Carwash, and plays in like ten other bands, including the Hot Pickles and other country bands. Although Sarah was featured on an episode of This American Life, she is most well known for her countrified voice, her cutting and witty lyrics, and being a genuine writer, craftsperson, mother, and educator.