SARAH loved the square dancing unit in the 4th grade. Even though she grew up in North Carolina, she was first inspired to clog at a barn dance and potluck wedding in Iowa. She danced with the Geese in 2002-2003, and in April 2008 she rejoined the flock. Sarah loves wearing pretty dresses. More importantly, she met her husband and many of her dearest friends through clogging and square dancing. She loves being part of this community who make music and dance together.

ANNA joined the Geese in October of 2009. She grew up in Minneapolis and loved to tap dance as a girl. Since then she’s been known to break out in tap on a hardwood floor. When she’s not practicing Appalachian clogging with the Geese, she enjoys dancing with her son Del, along with her husband Kevin on banjo. Anna also likes to get out on the town and hear all kinds of live music.

LAURA learned to clog from a former Goose through Minneapolis Community Education and has been dancing as much as possible ever since. It just took one year of attendance at Moose Jaw to seal the desire to someday dance with the Geese. You might currently find her at the Monday Night Square Dance, a jam with friends, or adding some percussion to the folk rock tunes of the band Wailing Loons. In her spare time she enjoys travel, biking, watching movies, and baking sweet treats. 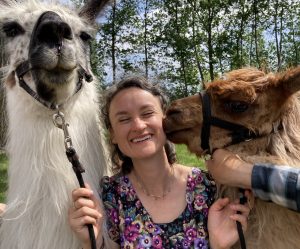 Growing up in Los Angeles, EMILY never thought she’d end up in Minnesota, let alone as a regenerative livestock farmer! But she’s glad she did, because that led her to be introduced to the Geese in 2020. Once she learned of their existence and dancing and musical genius, she knew she had to join. It was serendipity that the group would hold auditions the next year and she could join the honkin’ good time. When she’s not dancing or raising animals, Emily is a mother and jewelry artist. 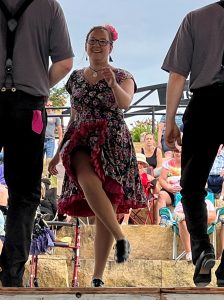 JoANNA was first captivated by clogging when she saw it at a festival during undergrad. Pairing body movement and dance as artistic expression, with musicianship and being an instrument in the band was an unbeatable combination – and once she started dancing herself, she learned that the crowd excitement for clogging isn’t a bad addition! She started with some local classes, and then formed a group called Pomp & CircumStomp with two other local cloggers as a way to fulfill her clogging needs, offering their clogging services to whichever bands would have them – and it was a ton of fun! In November 2021, she joined the Wild Goose Chase Cloggers, excited to learn from their long history and deep knowledge of the craft. When not clogging, JoAnna is playing music, bikepacking on her motorcycle or bicycle, or playing capoeira and daydreaming about Brazil. 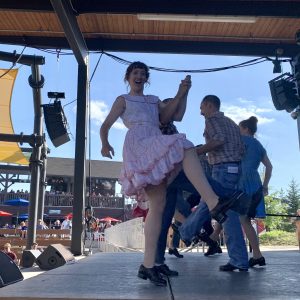 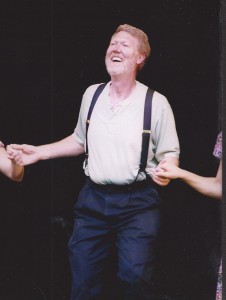 “Dr. B” is the senior member of the Geese and is its longstanding “fearless leader”. As such, he is responsible for coordinating the public appearances of the cloggers, including organizing the overseas tours for the group. He has choreographed many of the dances in the Geese’s repertoire. “I have been with the group for many years and I continue to be impressed with how audiences love to watch us perform. I think that we have been able to spread the love of clogging throughout the Midwest and in many parts of the world”. Jim also choreographs and calls Contra Dances in the Twin Cities and sings with The Gilbert & Sullivan Very Light Opera Company. 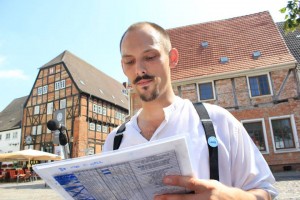 JOHN, born in the frigid period of 1981, grew up in the great city of Minneapolis, Minnesota. He was fortunate enough to have been birthed of the Folk community therein. The son of two Wild Goose Chase Cloggers, and having made his first onstage appearance at the ripe old age of about ~5 months, you could say that clogging is in his blood. After a brief, and squandered, hiatus, he found his way back to where he belongs. “Thank you, Mom and Dad, for always knowing this would someday make me so happy!” 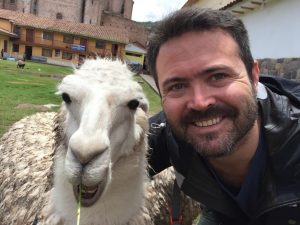 NICO (on the right) is French and makes jokes only llamas understand.

JULIA first saw clogging at a Pert Near Sandstone show, and immediately fell in love. After some classes, she met some like minded cloggers and formed the trio Pomp & CircumStomp. Julia loves the community and creative outlet clogging provides, not to mention just how much gosh darn fun it is! Looking for more excuses to clog and learn new step, she joined the Geese in 2021 and is so glad she did. When not clogging, she’ll likely still be dancing at a local show, biking around town, or making art at home. 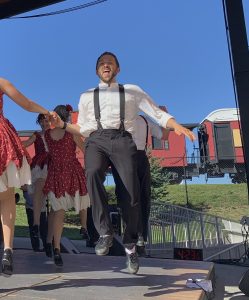 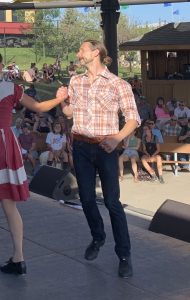