I love the way tunes are passed down from generation to generation. I love it when the fiddlers pick the tune and the banjo and the guitar players just have to figure it out on the spot. I love it when we’re in a jam and one tune ends and somebody says, “What tune was that?” It means you don’t have to know a tune to play it. I also love it in a jam when a tune ends and somebody says, “That’s not how I play it,” or, “That tune sounds a lot like this tune,” or, “Where did you get that tune?” Because these tunes have traveled miles and miles. They’ve crossed oceans. They’ve portaged through history and back again, and often times they don’t look the same when they return. But there is an aspect of the tunes that has always made me uncomfortable, and that is what I am going to try to express here.  Some tunes in the old-time canon contain embedded racism. I call these tunes n-tunes. It is important to name this category of tunes and to address them as they arise, as this is the first step in abandoning racism.

In n-tunes, usually the word ‘coon’ or ‘joe’ or ‘john’  is commonly used in place of the n word (i.e. Coon Dog, Eph Treed a Coon, Lazy John, Cookhouse Joe, Run, Boy, Run). These are not the only words that are used in place of the n word, but they are some popular ones. I’m still uncomfortable with this category of tunes partly because, as Britt Julious explains in her article about the reappropriation of the n word in African American culture, “For self-aware racists, they understand the severity of the N-word, but refuse to truly give it up, instead resorting to coded language to make their point fuelled by hatred.”

In this respect it’s not surprising that many of the old-time tunes’ names have been coded. I don’t think that they were coded in order to ‘make their point fuelled by hatred,’ but in fact just the opposite. I think that many people were ashamed that these tunes and the old-time tradition contained such racism.  In some old recordings of fiddlers, you can hear them using the n word.
This is not surprising considering the n word was considered acceptable by white people in the early 1900s when many of these tunes were first being recorded.  But later recordings reveal that the names were changed.  I can imagine that the change did not come about intentionally. Perhaps the changes came about as younger, liberal, white, urban fiddlers started going out into the country and the mountains to learn from the older generations of fiddlers like Clyde Davenport, Tommy Jarrell, Luther Strong, and the like. Perhaps the changes came about as the Civil Rights movement of the fifties and sixties started to permeate further reaches of the country.

Here is an article about the history of racism in folk music, minstrel shows, and the effects of the n word.1 In it, Ron Olesko describes the roots of the song ‘Turkey in the Straw’. The article states 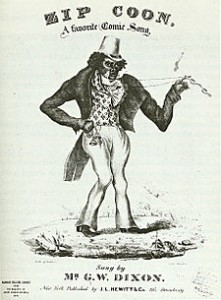 that “In his blog, Johnson writes, ‘there is simply no divorcing the song from the dozens of decades it was almost exclusively used for coming up with new ways to ridicule, and profit from, black people.’” Throughout music history, there are many examples of white musicians appropriating black music. Look at, for instance, the song selections at Sun Records for Elvis, the Rolling Stones’ band name, Pat Boone ripping off Little Richard, etc.

I am not suggesting that in order to recognize the racist history of these tunes that we should change their name back to the original. This would in no way do justice to the African-American culture of today, nor would it bring to light the injustice brought forth by many white folks who appropriated African-American song and dance without fair compensation.2 It is my suggestion that while we play these old-time tunes that reference racism or discrimination that we pause (preferably not during the tune) and acknowledge their history. It would be respectable, for example, after playing a n-tune to take a moment and just say, “This tune name was changed,” or, “This tune isn’t really politically correct”. In this way we can name racism, and recognize a different time, era, and way of thinking.

If we just keep playing n-tunes without recognizing their true roots, we are employing a colorblind attitude much like the dysfunctional attitudes towards race employed in the Reagan era. Colorblindness does not recognize diversity or difference. It merely refuses to admit that there is a problem. It is okay to recognize that these tunes and this tradition have a checkered history. In fact, as white people, we should be recognizing those major blemishes within the canon of tunes that we so enjoy playing. Naming these tunes is the start of overcoming racism. It is only just that we pay due respect as privileged white people to the history of slavery in the United States. It is the least we can do and only the beginning.  Perhaps the next step would be to change the current names of the tunes so that they don’t contain racially slurred terms like ‘coon’.

Other articles on the appropriation of black music: